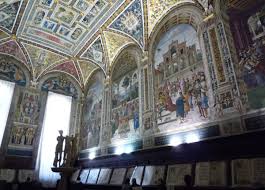 Tuscany is definitely the right place where you can learn, enjoy and discover the real Italian art and literature.

That is also why you can find a library inside a church.

Nope, it’s not a joke, but the strange truth: the Piccolomini Library is located inside the Dome of Siena, the cathedral located in the center of the city.

Once you enter in the church-after having paid the ticket, which is 3€-, turn left and you reach the Library, which has the same amazing pavement of the Dome, as well as the marble columns.

The Piccolomini family has a really long and important story in town, even though they were from Pienza, in the Val d’Orcia area.

The purpose of the library was to keep the collections of some very rare manuscripts, but they never made it there. So tourists can just admire the amazing hand designed volumes and the beautiful frescoes made by Pinturicchio.

They are simply amazing even for those who are not into art that much, since the details of every single characters are incredible and their dresses show all the luxury of that time.

You will have the impression of reading a story through the 10 scenes painted on the wall: they represent the most important steps in the live of Pope Pius II.

In fact, he was ambassador to several European courts, he paid homage to both the new Emperor and the ailing Pope, he introduced Eleonora to the Emperor Frederick III, then became cardinal and, finally, Pope.

On the ceiling, of course there is the Piccolomini family stem, right into the center, while surrounded by blue, red and gold symbols which drive tourists crazy. They try to figure their meaning out, but most of the time they have to give up, since the signs are really grotesque.