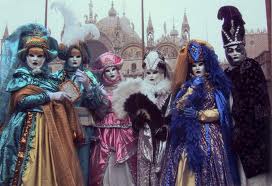 Here there is the second part of article which describes the Italian carnivals.

Check the place you are in, and if you are lucky enough to be there during the event, be sure not to miss it, since you’ll regret it. For sure.

The Carnevale dei Figli di Bocco, in Tuscany, is the latest one, since it takes place in April. This year it will be held Castiglion Fibocchi, a town near Arezzo, located in a very strategic area. In fact it is situated the Cassia Vetus Roman road, having the mountains on the background. People can have a breathless view of the place, also thanks to the fact the town dates back to the Medieval time, to the XII Century. The carnival leads people wear baroque costumes and paper pulp masks, enjoying their time and having fun.
Castiglion Fibocchi – Arezzo – April 21 and April 27 2014

The Carnival of Acireale, is the most famous and funniest in Sicily. In fact, it includes a very great parade which is held downtown the city, letting people and visitors discover the beauty baroque attractions. It is a very nice and innovative way to discover Acireale and one of the historical festivities of the island. Moreover, it has a rich program, with music, dance, masks and balls. It is definitely a must see thing if you happen to be in Sicily during that time.
Acireale – Catania – From February 15 to March 4, 2014

Putigliano is a nice town in Puglia, located near Bari, and it is considered one of the more important in Southern Italy, as well as one of the oldest one in Europe. Its carnival has allegoric floats introduced by the mascot called ‘Farinella’, which was named after a local dish made with barely flour and chickpea.
Putignano, Puglia- February 23, March 2, 4, 9, 2014