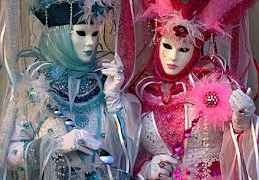 February is already started and Italians can’t wait for the Carnival. Due a very ancient tradition, in fact, we celebrate it a very special event before starting the Lent.

In this post you will read the most important Carnivals in Italy and when they are going to be held this year. Due to the fact that there are several of them, this post will be the first of two.

CARNIVAL OF VENICE
This is the Italian carnival.
It is opened by the very famous open city party, having guests from all over the world. Fun is the keyword, due to the reason that all the city becomes multicolor, hosting shows and parades.
You won’t recognize St. Mark’s Square, the main spot in Venice, since it will be the true centre of this party, having music and masks everywhere all day long. Not to mention the fact that is also hosts some of the very traditional events, such as “La Colombina” or the “Flight of the Angel”.
Do not miss the chance to go to one of the grand masked balls: it is a must for tourists who want to immerse themselves in the Serenissima’s festive history.
Venice, from February 15th to March 4th 2014

This carnival is considered the most flamboyant of all the Italian ones, due to the fact that there is always a lot of political satire. The traditional shows of gigantic papermache’figures will be opened by big parties, theatre showm and big parties.
If you have already attended the carinival of Venice, go to this one. You will love it.
Viareggio, February 16th and 23rd,
March 2nd, 4th and 9th 2014

The carnival of Ivrea is well-known for the famous Battle of the Oranges, which will be held on March 2nd this year. It is a symbolic fight for liberty and freedom, and the battle is a very interesting national event, considered as a goliardic heritage for its meaning. It is opened by music, in particular by the sound of both drums and pipes.
Ivrea, from February 16th to March 5th 2014